I had a crush on a guy, for the first time in a very long time but what is a crush? The Urban Dictionary defines a crush as: a burning desire to be with someone who you find very attractive and extremely special. Is it really a desire or is it just an over thinkers nightmare?

Personally I am a major over thinker, ask my friends, I think they get sick of me talking their ears off about the same scenario over & over. With every guy that dicked me around I would analyse what they said, what I did, what I could have done differently, what was my fantasy scenario if I had of done that differently… Jeez, no wonder my head is always at the point of explosion!

But what is the point of a crush? With all the idiots that I’ve dated I was at a point where I just couldn’t bring myself to make the first move & so there is no way I could approach a crush! I envy those people who would; they’d say “what have you got to lose?” I can only reply, nothing but dignity! I’m not a shy quiet person by any means but when it comes to men that I like I become super shy & act like an idiot, I feel like it really takes a while to get to know me properly, so approaching a crush would be crippling for me. I would be like Chandler Bing from Friends saying “blarh blarh, flannin!”

I play the scenario in my head, we would meet in the lift (our usual place that we bump into each other), he would smile at me, I would smile back admiring his brown unruly hair, we would chat, the conversation would get a little flirty & in the 20 seconds it takes to get to the third floor, he would ask me out for a drink, I would accept & he’d say he’d email me later in the day to confirm. Of course as soon as my computer has booted up, my email would ping alerting me that my crush had sent me the confirmation email, complete with ‘can’t wait!’ Ha! In your dreams IBD4U! 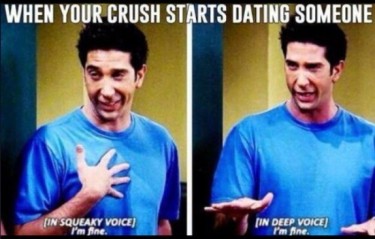 So my question is this, is it really a crush if you are never going to act on it? I mean I like this guy, we’ve interacted a tiny bit at work but we work on different floors, we’re polite as we walk in the building but stalkbooking them & knowing their schedule so you can arrive at work at the same time just so you can say hello, doesn’t necessarily make you a match made in heaven, that just makes you a stalker?

I think Urban Dictionary should change the meaning of crush to: a human who lightly stalks another human in the hopes of an insignificant interaction, that will probably go nowhere because one human in too chicken & the other human is completely unaware!

One thought on “Crush”