Another guest blogger has decided to share some stories with me too. I love that you are all not leaving me out here on my own! Thank you for that.

I like to post the ones that aren’t similar to any of my stories & this is definitely one of those!

A few years ago I met this guy online, not on tinder, some other site I can’t remember. I’d consciously decided to try dating guys outside of my usual type… cos that hadn’t really been working out for me so well (hot, unemployed and practically homeless). So this guy had a job (tick), a house (tick) and was funny (tick), he was also pretty short and a bit squishy. We had good banter so we went on a few dates which went well.

At about date 4, I think, he invites me and my dog over for dinner. He can cook (tick) and he also has a dog (tick). Anyway, his dog is one of those rampant humpers and he went absolutely bananas over my dog, it was hilarious. My dog is a clueless asexual galloot and is just running around like a loon with his hornbag dog in hot pursuit.

My belly was sore from laughing (not just at the dogs) so we, the humans, retired inside with a glass of wine on the couch and he makes a really cheesy manoeuvre for a first kiss (think yawn and stretch), it’s nice and we progress to his bedroom. He is a bit of a watcher so he starts playing with himself while I get naked and we’re fooling around and it’s fun. We start the old P in V action and then he screams, really screams, in agony, I try to work out what’s wrong and he advises he’s got a detached or travelling ball which has decided to jump up into his body cavity not in the cosy scrotum where it should be, he insists on continuing and doesn’t withdraw but continues grimacing. Bit of a masochist maybe.

Anyway, I clamber off after bit and just play with his cock until his ball resumes a better location. We start again and I’m grabbing his arse to pull him in hard and then in the moment I grabbed his hair gently to push his head up. He freaks out and grabs his head and runs to the bathroom. I’m completely confused and it turns out I had dislodged his toupee/hair piece thing that I didn’t know wasn’t real hair. (I don’t need my eyes checked, it was really good, completely real looking). 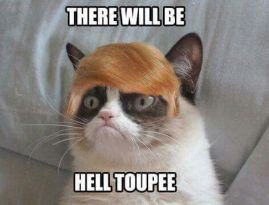 He’s totally soft at this point and embarrassed and returns with a beanie on his head and turns the lamp off. I ask him about the hair trying to reassure him that being bald is fine and he tells me he had an accident when he was younger and he got partially scalped and there’s some ugly scarring. I figure that’s fair enough but my bullshit detector is ringing a bit, but who knows! He’s feeling pretty vulnerable so we end up getting back into it and he finishes with the beanie in place and my hands firmly pinned to the bed.

Funniest, weirdest most awkward interlude I’d had for a while…
I think we had one more date, I spent half of it looking at his hair when he wasn’t looking. The hair wasn’t the killer for me though he had some other quirks I wasn’t too keen on, so that was that!

WOW, I don’t think I’ll be able to not look at guys hair now & wonder!